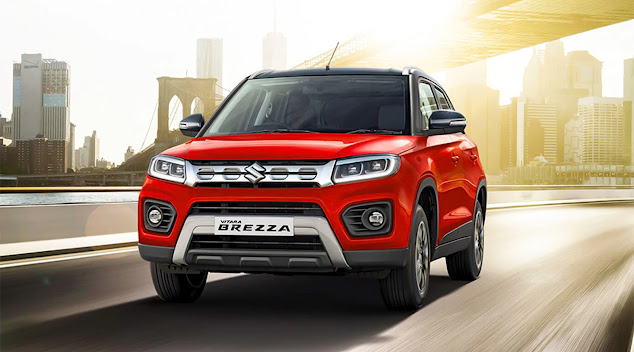 Now, Maruti Suzuki has released a teaser that showcases the heads-up display of the 2022 Brezza. The bookings of the compact SUV have been opened.

The SUV will be offered with six monotone choices:  Arctic White, Splendid Silver, Magma Grey, Sizzling Red, Exuberant Blue, and Brave Khaki. You can opt for a black roof on the red and silver colours, while the Khaki gets a white roof. Dual tone options are limited to the ZXI and ZXI+ trims.

Maruti will equip it with the latest version of the 1.5-litre petrol engine found in the new Ertiga and XL6. The 103PS/137Nm petrol mill will likely be paired to a 5-speed manual along with a 6-speed automatic.

The 2022 Brezza would also come with a 360-degree parking camera that will help in parking the compact SUV. The flat-bottom multi-function steering wheel is also the same one that we have seen on the Baleno.

The new touchscreen infotainment system is also the same one that we have seen on the Baleno. It does support Android Auto and Apple CarPlay. There would also be Suzuki Connected car technology that now supports more features.

The exterior of the Brezza has also been heavily redesigned. Maruti Suzuki has retained the boxy design because that is what gave Brezza its SUV stance. Up-front, there are new sleek LED headlamps that have a twin-pod design. The headlamps use an LED projector setup and also have integrated LED Daytime Running Lamps.