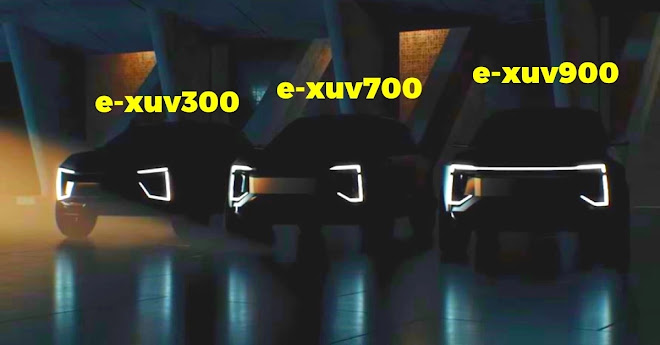 Today, August 15th, Mahindra and Mahindra will unveil its big plans on the electric vehicle [EV] front that it has been teasing for a while now.

Autocar reports that the event is likely to have more concepts on show than thought earlier. A full five instead of three futuristic EV concepts are going to be on the show.

While some of these would be for the future, there will be near production-ready version of XUV700 designed at Mahindra Advance Design Europe in the UK. Likely to be called XUV800, this SUV will borrow batteries from Volkswagen group and will come with both single and dual motors for two-wheel drive and four-wheel drive, respectively.

As with many EVs, the two-wheel drive version might be rear-wheel driven instead of being a front-wheel drive as is the case with ICE vehicles.

Mahindra is likely to retain the styling of XUV700 for its electric XUV800. There might be some changes to the front air dam and front and tail light clusters. Elements to highlight its pure EV credentials might be added as well.

The underpinning would be all new as XUV800 is built on a new bespoke EV platform that will serve as the base for other EV from Mahindra.

While near production-ready, XUV800 might not be the first EV from Mahindra on this new platfor Autocar report suggests that XUV400 will precede the big brother with launch due in early 2023. The XUV400 will compete with the likes of MG ZS EV, Tata Nexon EV and Hyundai Kona.

In the last Auto Expo, Mahindra showed a coupe version of its EV too. Those are likely to follow the traditional two-box SUV designs. These could get XUV900 and XUV1000 names.

Five SUVs, each with a different body style to be unveiled by Mahindra on India’s 75th Independence day. These cars have been designed by Mahindra’s Advanced Design Europe Studio based in the UK.

Mahindra recently raised Rs. 1,925 crores from British International Investment to augment its EV plans. It will set a new company to manufacture EVs with a total investment in the range of Rs. 8,000 crores, under its Born Electric initiative.

The British investment firm is expected to hold less than 5 percent stake in the company. By 2027, Mahindra expects to sell 2-3 EVS for every 10 units of ICE vehicles it sells.

The company, that has trailed its rival Tata Motors in EV race, is quite bullish on EV and could be targeting volumes of 9,000 to 12,000 a year in a few years from now.