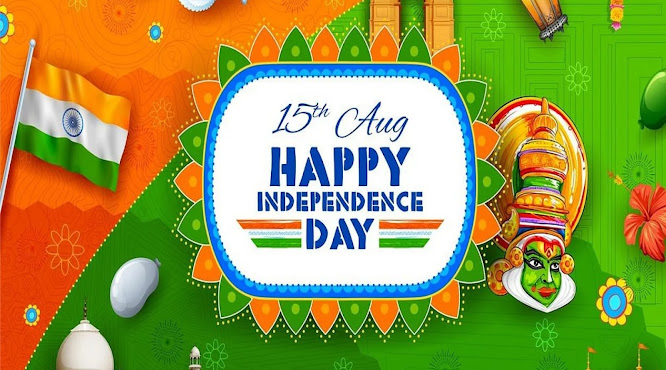 Independence Day is celebrated annually on 15 August as a national holiday in India commemorating the nation's independence from the United Kingdom on 15 August 1947, the day when the provisions of the 1947 Indian Independence Act, which transferred legislative sovereignty to the Indian Constituent Assembly, came into effect.

India retained King George VI as head of state until its transition to a republic, when the Constitution of India came into effect on 26 January 1950 and replaced the dominion prefix, Dominion of India, with the enactment of the sovereign law Constitution of India. India attained independence following the Independence Movement noted for largely non-violent resistance and civil disobedience.

Independence coincided with the partition of India, in which British India was divided along religious lines into the Dominions of India and Pakistan; the partition was accompanied by violent riots and mass casualties, and the displacement of nearly 15 million people due to religious violence.

On 15 August 1947, the first Prime Minister of India, Jawaharlal Nehru raised the Indian national flag above the Lahori Gate of the Red Fort in Delhi. On each subsequent Independence Day, the incumbent Prime Minister customarily raises the flag and gives an address to the nation.

The entire event is broadcast by Doordarshan, India's national broadcaster, and usually begins with the shehnai music of Ustad Bismillah Khan. Independence Day is observed throughout India with flag-hoisting ceremonies, parades and cultural events. It is a national holiday.

European traders had established outposts in the Indian subcontinent by the 17th century. Through overwhelming military strength, the East India Company fought and annexed local kingdoms and established themselves as the dominant force by the 18th century.

Following the Indian Rebellion of 1857, the Government of India Act 1858 led the British Crown to assume direct control of India. In the decades following, civic society gradually emerged across India, most notably the Indian National Congress Party, formed in 1885.

The period after World War I was marked by colonial reforms such as the Montagu–Chelmsford Reforms, but it also witnessed the enactment of the unpopular Rowlatt Act and calls for self-rule by Indian activists. The discontent of this period crystallised into nationwide non-violent movements of non-cooperation and civil disobedience, led by Mohandas Karamchand Gandhi.

During the 1930s, the reform was gradually legislated by the British; Congress won victories in the resulting elections.

The next decade was beset with political turmoil: Indian participation in World War II, the Congress' final push for non-cooperation, and an upsurge of Muslim nationalism led by the All-India Muslim League.

The escalating political tension was capped by Independence in 1947. The jubilation was tempered by the bloody partition of colonial India into India and Pakistan.

Millions of Muslim, Sikh and Hindu refugees trekked the newly drawn borders in the months surrounding independence. In Punjab, where the borders divided the Sikh regions in halves, massive bloodshed followed; in Bengal and Bihar, where Mahatma Gandhi's presence assuaged communal tempers, the violence was mitigated.

In all, between 250,000 and 1,000,000 people on both sides of the new borders died in the violence. While the entire nation was celebrating the Independence Day, Gandhi stayed in Calcutta in an attempt to stem the carnage.On 14 August 1947, the Independence Day of Pakistan, the new Dominion of Pakistan came into being; Muhammad Ali Jinnah was sworn in as its first Governor General in Karachi.

The Constituent Assembly of India met for its fifth session at 11 pm on 14 August in the Constitution Hall in New Delhi. The session was chaired by the president Rajendra Prasad. In this session, Jawaharlal Nehru delivered the Tryst with Destiny speech proclaiming India's independence.

Independence Day, one of the three National holidays in India (the other two being the Republic Day on 26 January and Mahatma Gandhi's birthday on 2 October), is observed in all Indian states and union territories. On the eve of Independence Day, the President of India delivers the "Address to the Nation". On 15 August, the Prime Minister hoists the Indian flag on the ramparts of the historical site of Red Fort in Delhi.

In his speech, the Prime Minister highlights the past year's achievements, raises important issues and calls for further development. He pays tribute to the leaders of the Indian independence movement. The Indian national anthem, "Jana Gana Mana", is sung.

The speech is followed by a march past of divisions of the Indian Armed Forces and paramilitary forces. Parades and pageants showcase scenes from the independence struggle and India's diverse cultural traditions.

Similar events take place in state capitals where the Chief Ministers of individual states unfurl the national flag, followed by parades and pageants. Until 1973, the Governor of the State hoisted the National Flag at the State capital.

In Delhi and some other cities, kite flying adds to the occasion. National flags of different sizes are used abundantly to symbolise allegiance to the country. Citizens adorn their clothing, wristbands, cars, household accessories with replicas of the tri-colour. Over a period of time, the celebration has changed emphasis from nationalism to a broader celebration of all things India.

The Indian diaspora celebrates Independence Day around the world with parades and pageants, particularly in regions with higher concentrations of Indian immigrants. In some locations, such as New York and other US cities, 15 August has become "India Day" among the diaspora and the local populace. Pageants celebrate "India Day" either on 15 August or an adjoining weekend day.