-->
Home
Devotional
Who Was Devi Shanta? Unveiling the secret of Her Relationship With The Epic Of Ramayana!

Who Was Devi Shanta? Unveiling the secret of Her Relationship With The Epic Of Ramayana! 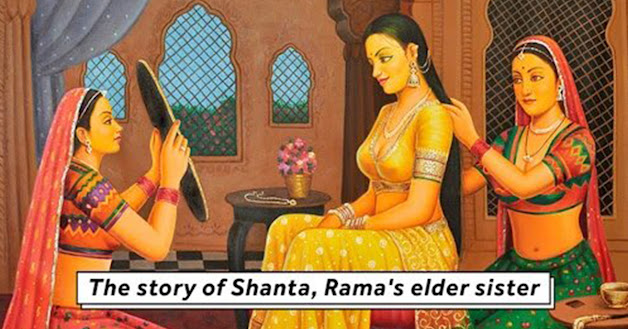 Ramayana has been a great epic that has been considered to be one of the holiest books of the Hindus. For years on a stretch, we have heard stories related to this epic. From being an infant to being a grown-up adult, we have been fed with information that is related to the epic and the people that had been involved in the rescuing Maa Sita from the captures of Ravana.

Devi Shanta was the daughter of Maharaj Dasharatha and Queen Kaushalya. Maharaj Dasharatha had two other queens namely Kaikeyi and Samitra, who according to everyone's information, had four sons Ram, Lakshmana, Bharata, and Shatrughna.

But there was an elder sister as well, who was hardly mentioned anywhere. Shanta was a very promising girl, perfect in every field, she had a unique knowledge in every field.

She was educated in the Vedas, arts, craft as well as in warfare, and was considered to have been very beautiful. One day, while her father, the king Romapada, was busy in conversation with Shanta, a brahmin came to ask for help in cultivation in the days of the monsoon. Romapada did not pay attention to the brahmin's plight. This irritated and enraged the brahmin, who left the kingdom.

Indra, the god of rain, was unable to bear the insult to his devotee, so there was little rainfall during the monsoon season resulting in drought in the kingdom. Meanwhile, Dasharatha wanted a son to continue his legacy and enrich his royal dynasty.

It was advised that the troubles of both kingdoms could only be alleviated by yajnas performed by a brahmin with powers that come from the observance of perfect chastity and that the only such person was Rishyasringa.

Devotees from all over the world come for 'darshan' to worship both. In this temple of Shanta Devi, whoever worships the couple with a genuine heart, is granted the blessings of Lord Rama. The festival of Dussehra is celebrated with great grandeur in the temple of Goddess Shanta.