-->
Home
Sports
The Line vs. Isner In Rome : Nadal sets up clash with Isner

The Line vs. Isner In Rome : Nadal sets up clash with Isner 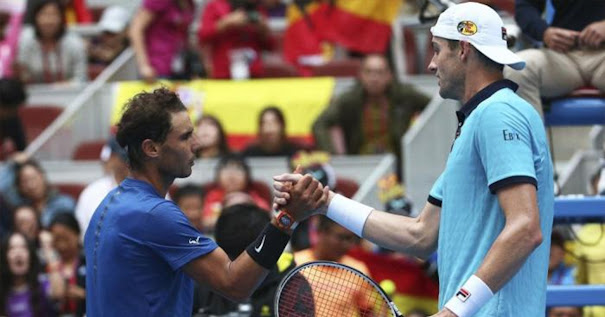 Nadal has never lost consecutive matches on clay and puts his 43-0 record following defeat on the surface on the line against John Isner. The Spaniard is also 18-0 against Americans on clay, being pushed as far as a deciding set just twice.

But both of those deciders came against Isner, who extended Nadal to five sets at Roland Garros (2011) and three sets in Monte Carlo (2015). Nadal leads their ATP Head2Head 7-1, with Isner's win coming at the 2017 Laver Cup. They also met in 2015 in Rome, a match Nadal won in straights, but have not played since Beijing in 2017.

Isner is seeking his first win against a Top-5 player since he beat Marin Cilic and Alexander Zverev en route to the 2018 Miami title.

After a three-set quarter-final loss to Carlos Alcaraz in Madrid — his first tournament back after a six-week injury layoff — Nadal on Monday slipped one place to No. 5 in the Pepperstone ATP Live Rankings as he defends 1,000 points from his title run one year ago in Rome.

He must better the Greek's result this week to maintain his standing at No. 4 in next week's Pepperstone ATP Rankings.