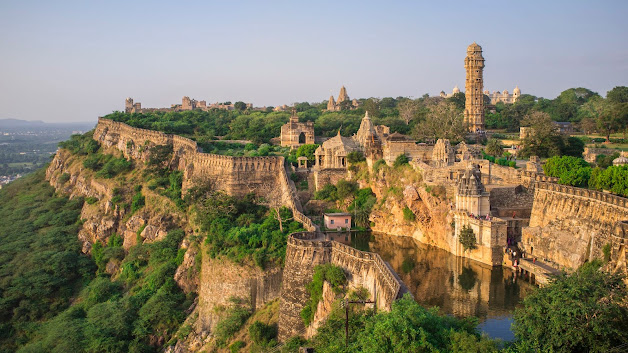 Chittorgarh, located in the southern part of the state of Rajasthan, 233 km from Ajmer, midway between Delhi and Mumbai on the National Highway 8 in the road network of Golden Quadrilateral. Chittorgarh is situated where National Highways No. 76 & 79 intersect.

The fort rises abruptly above the surrounding plains and is spread over an area of 2.8 km2. The fort stands on a hill 590.6 ft high. It is situated on the left bank of the Berach river and is linked to the new town of Chittorgarh developed in the plains after 1568 AD when the fort was deserted in light of introduction of artillery in the 16th century, and therefore the capital was shifted to the more secure Udaipur, located on the eastern flank of the Aravalli hill range.

Mughal Emperor Akbar attacked and sacked this fort which was but one of the 84 forts of Mewar, but the capital was shifted to Aravalli hills where heavy artillery & cavalry were not effective.

A winding hill road of more than 1 km length from the new town leads to the west end main gate, called Ram Pol, of the fort. Within the fort, a circular road provides access to all the gates and monuments located within the fort walls.

Chittorgarh Fort is situated around 100 km from Udaipur and is one of the prime tourist attractions in Rajasthan. The Chittorgarh Fort has been witness to the Rajputana virtues of pride, loyalty and sacrifice.

Perched over a hill, Chittorgarh Fort served as the capital of the erstwhile kingdom of Mewar. In the early 14th century, the Chittorgarh Fort was invaded by Delhi Sultanate ruler, Alauddin Khilji.

As per legends, Khilji defeated the then ruler of Mewar, Rana Ratan Singh. According to Malik Muhammad Jayasi’s poem, Padmavat, Khilji attacked Chittor after being smitten by Ratan Singh’s beautiful wife, Queen Padmini.

Khilji intended to marry the stunning Queen. However, after the defeat of King Ratan Singh, Queen Padmini committed jauhar (self-immolation) to safeguard her honour.

Even after centuries, Chittorgarh Fort hasn’t ceased to amaze visitors due to its glorious history and breathtaking architecture.

The fort and the city of Chittorgarh host the biggest Rajput festival called the "Jauhar Mela". It takes place annually on the anniversary of one of the jauhars, but no specific name has been given to it. It is generally believed that it commemorates Padmavati's jauhar, which is most famous.

This festival is held primarily to commemorate the bravery of Rajput ancestors and all three jauhars which happened at Chittorgarh Fort. A huge number of Rajputs, which include the descendants of most of the princely families, hold a procession to celebrate the Jauhar. It has also become a forum to air one's views on the current political situation in the country.

Six forts of Rajasthan, namely, Amber Fort, Chittorgarh Fort, Gagron Fort, Jaisalmer Fort, Kumbhalgarh and Ranthambore Fort were included in the UNESCO World Heritage Site list during the 37th meeting of the World Heritage Committee in Phnom Penh in June 2013. They were recognized as a serial cultural property and examples of Rajput military hill architecture.

The ruined city of the Cold Lairs from The Jungle Book by Rudyard Kipling, where the protagonist Mowgli is taken to after being kidnapped by the Bandar-log, is noted by the Kipling Society to have possibly been based on Chittorgarh Fort, which Kipling personally visited in 1887, and would have been relatively close to the Aravalli Range also located in Rajasthan, the original setting of the Jungle Books before Kipling changed it to the hills of Seoni in Madhya Pradesh.