-->
Home
Food & Drinks
Why Coke Tastes Better at McDonald’s Than Anywhere Else?

Why Coke Tastes Better at McDonald’s Than Anywhere Else? 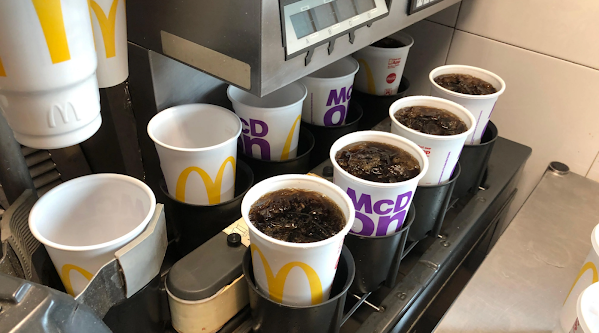 McDonald’s gets the same syrup delivered for their fountain machines that all restaurants get. There is no difference in the formula, and McDonald’s doesn’t add any special ingredients. The difference is that McDonald’s takes better care of its Coca-Cola than most restaurants do.

Typically, restaurants get their soda syrups in plastic bags, but Coca-Cola does something different for McDonald’s. The fast-food chain gets its Coke syrup delivered in stainless steel tanks. According to the New York Times, the material keeps the soda fresher, and your tongue can taste the difference.

Once the syrup reaches the restaurant, it doesn’t just become an afterthought. Both the syrup and the water (which goes through its own “proper filtration methods”) get pre-chilled before going into the soda fountain. Other places might rely on the dispenser itself to chill lukewarm water, but McDonald’s uses insulated tubes to deliver the liquid from the fridge to the fountain, keeping the liquid as chilled as possible, according to the New York Post.

This gives McDonald’s a head start in delivering the ice-cold Coca-Cola you crave. It also improves the carbonation in your drink. As soda warms up, the CO2 wants to escape quicker, according to researchers at the University of California, Santa Barbara. So because the water is kept so cold at McDonald’s, that gas doesn’t escape, and you maintain your fizz.

McDonald’s Coke is real Coke. Between the special transportation method, the pre-chilling process, and the ratio of syrup used to ice, McDonald’s Coke is going to taste a little fresher. But it’s as real as Coke can get!