THE ROLE OF ARTIFICIAL INTELLIGENCE & ROBOTICS IN SPACE EXPLORATION 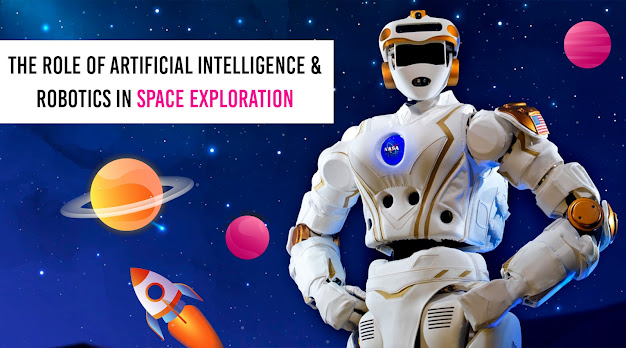 Robots are machines that have inbuilt artificial intelligence. They are used in all kinds of situations, especially where they can alleviate strenuous tasks or complete missions that are too dangerous for a human to undertake.

The term 'artificial intelligence (AI)' comprises all techniques that enable computers to mimic intelligence, for example, computers that analyse data or the systems embedded in an autonomous vehicle. Usually, artificially intelligent systems are taught by humans — a process that involves writing an awful lot of complex computer code.

The most successful AI implementations based on DL are rarely used in the space industry today, as the (statistical) models developed within the neural network are not human readable and have been impossible to replicate thus far.

AI, and in particular ML, still has some way to go before it is used extensively for space applications, but we are already beginning to see it implemented into new technologies. One area in which the applications of AI are being thoroughly investigated is in satellite operations, in particular to support the operation of large satellite constellations, which includes relative positioning, communication, end-of-life management and so on.

Potential applications of AI are also being thoroughly investigated in satellite operations, in particular to support the operation of large satellite constellations, including relative positioning, communication and end-of-life management.

In addition, it is becoming more common to find ML systems analysing the huge amount of data that comes from each space mission. The data from some Mars rovers is being transmitted using AI, and these rovers have even been taught how to navigate by themselves.

Here are some exemplary cases of robotics and AI in space tech.

1. Canadian Space Association launched Dextre, a robotic arm designed to install and replace small equipment such as exterior cameras or the 100-kg batteries used on the Space Station, and to test new tools and robotics techniques.

2. Voyager 1 and Voyager 2,  were designed to conduct close-up studies of Jupiter and Saturn, Saturn’s rings, and both Jupiter and Saturn’s largest moon. These robots are still communicating information via the Deep Space Network (DSN) and are presently closer to Pluto than to Earth or the sun.

3. Robonaut 2 follows in the steps of Robonaut 1, a ground-based prototype intended to help astronauts on spacewalks. Also known as R2, was the first US-built robot on the ISS. It joined the crew back in 2011 without legs, which were added in 2014.